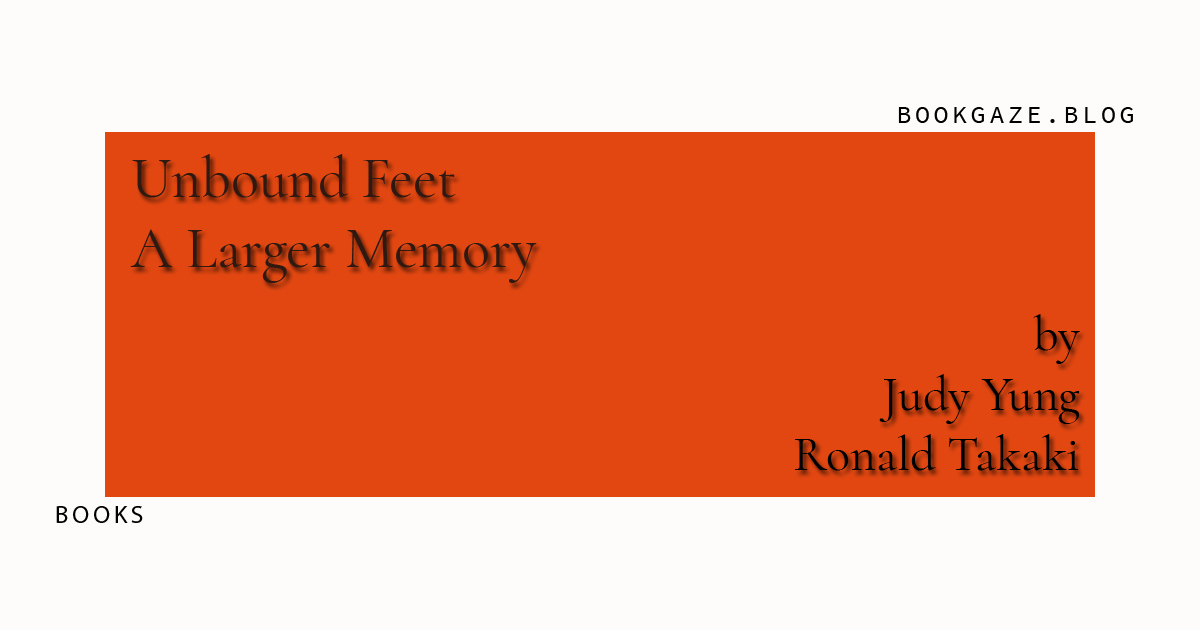 Happy Lunar New Year one and all. May the Year of the Tiger bless you and your family this year. In celebration of this event, I’m sharing a review of the books Unbound Feet: A Social History of Chinese Women in San Francisco by Judy Yung and A Larger Memory: A History of Our Diversity with Voices by Ronald Takaki.

The thesis of Unbound Feet is that there is a storied and engaging history found through the lens of Chinese American women and their voices are as valid as any other. The thesis of A Larger Memory was that by telling of the history of America through testimonials of people from all races, we would hear voices of people unseen in mainstream history courses. Both books accomplished their goals by incorporating essays of those who lived during the period in history that each author was analyzing. Both books accomplish the presentation of the often overlooked social aspect of history.

Yung’s book focused on analyzing and engaging with the testimonials and the statistical data she collected. Her focus on the social history of Chinese American women was a much narrower lens than Takaki’s. She shined a light on their everyday lives within and outside the home. She didn’t skimp on the discussion about the laws on the books that affected them either, such as the Chinese Exclusion Act of 1882.

Studying history through the lives of “normal” people is a critical aspect of social history as a topic. Yung’s focus was primarily on women born in China or those born here in America. The period of the book ranged from the nineteenth century when the Chinese first began to arrive in America until the end of World War II. It allows Yung to grab a wide brushstroke of women since people of Chinese descent did not try to come to the “Gold Mountain” until the political upheavals and quality of life dramatically changed in their homeland.

Nevertheless, there was a part of me that wished she could have continued past the World War II years and included voices from the present day. The blending of statistics from the time, alongside testimonials from the Survey of Race Relations (a primary source also present in Takaki’s book), made a compelling argument. It was fascinating to see the impact of each woman’s life as an American citizen, such as an arranged marriage, having their feet bound or unbound, or going to college.

Yung worked hard to present every side of an argument. For example, in the chapter First Steps, Yung offers the stories of Jade Snow Wong, Esther Wong, and Flora Belle Jan. Jade Snow was more open to being acculturated to America because she was born here. Esther was Jade Snow’s older half-sister, born in China, and acquiesced to their father’s rule easier than her sister. However, she fought for herself when it was necessary. Flora Belle ultimately rejected the gender roles placed on her and became a stereotypical “flapper” of the time. Accordingly, “Jade Snow Wong’s life was the dominant response of the second generation under study.” All three were middle-class, but all three had completely different reactions to living and working in Chinatown as second-generation Chinese American women in the 1920s.

Takaki’s approach to social history was much broader in scope. He presented the testimonials, oral histories, and other primary sources he found as pieces read in a historical context within their specific historical periods. He began with his own family in Hawaii. Then he segued into the founding of America as evidenced by the Puritans’ arrival here and then ended on the hot-button issue of affirmative action. He followed the American history timeline as generally taught in the classroom.

However, he allowed the reader to make their judgments about what they read. He also gives us a chance to change and perhaps add to what we already thought about whatever event he presented. Takaki does lead up to many of the testimonials by providing historical context. He does it as cleanly as Yung does, but he provides enough information to be put each essay into perspective before we read them individually. It allows the reader to read the book as a gateway to social history.

One excellent example of his providing historical context is his inclusion of letters written to the editor of the Jewish Daily Forward. A survivor wrote a letter about the Triangle Shirtwaist Fire. “When the fire broke out, the screaming, the yelling, the panic all bewildered me.” As students of history, we know what happened in that event and the aftermath. In addition, we have photographs and newspaper articles that have survived through the years as proof of the event. It turns out her fiancé rescued her, but when he returned to rescue more girls, he succumbed to the inferno. She had written to ask if she should move on, even though she was still in love with him. That is what makes social history such a powerful lens through which to study history: it puts the entire event into context. There are stories to be told that might get lost in the broader scrutiny of the experience.

After reading these books, a “Part Two” to Unbound Feet would be a fascinating addition. A sequel could continue the story of Chinese American women from World War II to the present day. Yung supplemented the book with a documentary of the same name that fleshed out the book better than words on a page. Upon searching for more information on Ronald Takaki’s work, A Different Mirror: A History of Multicultural America was a significant source. However, it seems people were a little offended by the tone of the work. It would be interesting to compare A Different Mirror and A Larger Memory in the future.

My rating for Unbound Feet:

My rating for A Larger Memory: